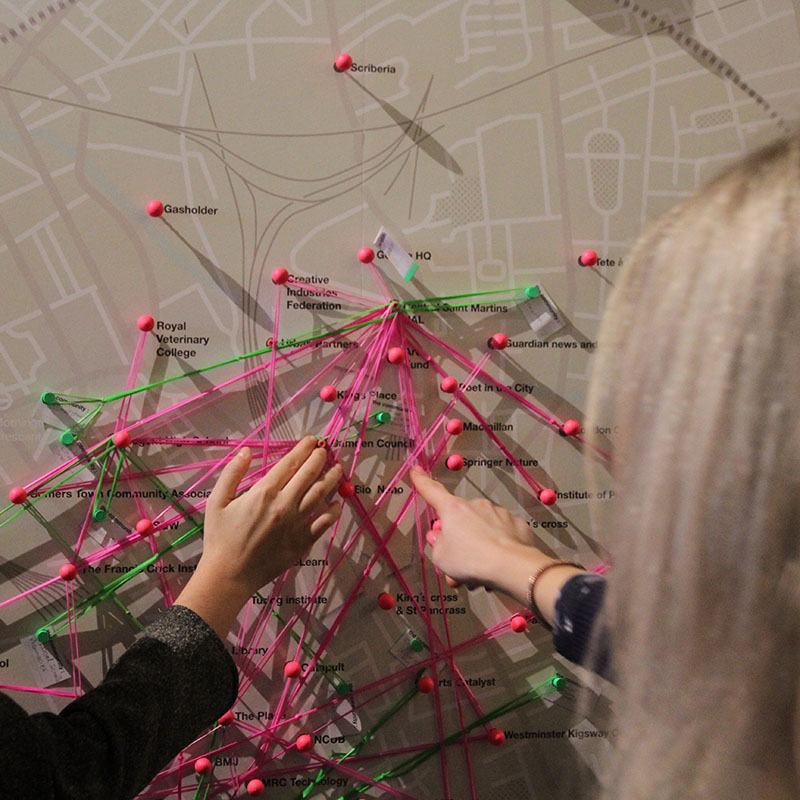 Organised by the Knowledge Quarter’s Community Engagement subgroup, the Show and Tell evening event at the Wellcome Trust’s beautiful Reading Room was an opportunity to showcase the work of the Public Collaboration Lab. We exhibited the Future Libraries and Home Libraries Service projects, showing photos, videos, publications and creative consultation tools. Several Central Saint Martins MA Industrial Design students designed and made an engagement tool for the evening – a KQ Community Engagement Map – that participants could use to map the communities they work with, visually showing the networks and reach of the KQ organisations. The students were on hand for the evening, discussing their PCL work and advising on the KQ community engagement map.

The evening provided the opportunity for KQ partners to network and try out some of the community engagement activities offered by their neighbours (the baby T-Rex feet proved very popular!).

At the Public Collaboration Lab we’re conducting research to increase understanding of Higher Education Institutions’ (HEI) role in supporting innovation practices within local governments, through design-led collaborative projects (those projects that engage designers and apply design methods and approaches as a central activity within the project).
National HEIs have already shared their design-led collaborative projects with local government through an online survey. Now, we want to invite local government across the county to complete an equivalent survey.

We’d love to hear from you about your experiences of local government collaboration with HEI in design-led projects.

This will help us develop typologies that illustrate different approaches to collaboration, that will help articulate synergies between design activities and local government needs and aspirations, and lead to greater potential for future collaboration.
https://www.surveymonkey.co.uk/r/pcl_lg
The survey should only take 15 minutes, and your responses are completely anonymous and will only be used by us in non-commercial research that forms part of the Public Collaboration Lab project. You can only take the survey once, but you can forward it to your colleagues to participate before the survey is closed on 31st April 2016.

We thank you in advance for your participation, and look forward to sharing the findings of our research with you. 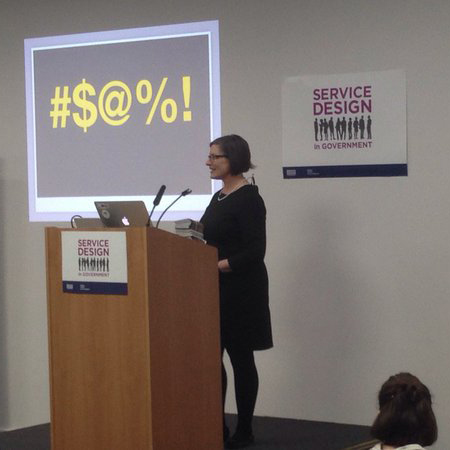 Beginning with a story about how a simple change in type size on a commonly used form led to two major wars and a world wide economic crisis, and ending with the metaphor of blind men describing an elephant, the Service Design in Government conference was really interesting.

Dana Chisnell from the Center for Civic Design in the US started the day with the first keynote about how design affects world peace, with the example of usability testing on American ballot designs. It was only after the 2000 American election with the ‘hanging chad’ issue that the State Department realised user testing on ballot papers would be useful. Lawsuits, economic meltdowns and IT disasters all kick start governments to look at design. Dana closed with ‘ultimately citizens will be better off because design is present’.

My main objective for attending the conference was to learn more about systems thinking, particularly in the context of design and local government. Storytelling and Design as a Tool for Systems Leaders was a mini-workshop facilitated by two collaborators; Jonny Mallinson form the Innovation Unit and Kristian Tomblin, a healthcare commissioner from Devon County Council (DCC). They collaborated on using storytelling to transform the service provision for people affected by domestic and sexual violence and abuse.

The last presentation of the day was on system thinking, given by Benjamin Taylor from the RedQuadrant consultancy. RedQuadrant work at the service end, to change public service delivery, they don’t work in digital, “I don’t think many people are doing service design in services, but in digital services”.

For Benjamin, a good way into systems thinking is American organisational theorist Russell Ackoff’s car analogy – if you take the best parts of the best cars and put them together, you don’t get the best car in the world, the parts have to be able to work together and to view the organisation as a technical problem. A whirlwind, informative tour of systems thinking, organisations and government followed.